This past Sunday, our daughter Kristy, whom you may have read about in earlier post, ran her first full marathon. That may not mean much to many folks but to us, her parents, this is a HUGE accomplishment. Please allow me to share Kristy’s account of her Marathon in her own words. This is what she posted to her facebook page:

For those of you interested…
My first Marathon recap:
The morning started cold- 29 degrees- but it was clear and warmed up to about 55 by the time I was done. Sunshine- no humidity, an occasional wind on some stretches, but truly, you could not imagine more beautiful weather to run a marathon in. I lined up to start, and my parents made it just before the gun went off- so I was able to hug them on my way out. The first 5 miles were hilly, but I felt strong. I kept focusing on going easy, and not going out too fast. Really concentrated on keeping my effort conservative. Up to mile 12 I felt strong and steady. Met a 77 yr old who was running his 70th marathon- had on an awesome shirt with Philippians 4:13. He cheered me on as he passed me
At mile 11 I saw some Friends (Patti Esterline Larr Aimee Hill Wallis) and mile 12 my parents and oldest son (Monika Tocknell John Tocknell Siddiq Brock) were cheering me on. Took a beautiful 4 mile loop out in the country. I was following, then passed a man running in a superhero cape that said “Marathon Man” and a girl (who I late found out was Tiffany Griffis) I paced myself with them for a while, then passed them. The way back was a straight shot up the bike path. The sun was shining but it was mile 17 and I was getting tired. Then the One Run For Boston passed me, which spurred me on. Ended up behind another elderly gentleman with Isaiah 41:30 on his shirt. More inspiration! By mile 21 I had slowed considerably, having to resort to a run/walk. Then Marathon Man and Tiffany came into my life. Marathon Man is from Australia, he has the world record for most marathons run in a year (he has a Facebook page). He was interviewing and recording first time marathoners- so I told him my story. Because he was recording me and distracting me I ran for 2 miles straight when I was worn and had to take a walk break, I met Tiffany. We started to do a run/walk together. We pushed ourselves to the next tree, the next mile marker, and we made it the last 3 miles together. I swear I couldn’t have made it without her. It was her first marathon too. I only wish she didn’t live in West Virginia. but we are now Facebook friends at least! along those last 5 difficult miles my sister in law (Holly Muterspaw Tocknell) and niece and nephews met me in 3 separate places, and another friend (Stephanie Jopson) met me about a mile from the finish. Their support motivated and encouraged me to keep pushing.
As we neared the finish line I saw my family- my husband, kids, my parents, my sister in law. My kids ran with me across the finish and Tiffany and I hugged each other. We did it! We finished. I sobbed and was completely overwhelmed. To think where I once was only 3 yrs ago- 300 lbs and unable to run the distance between two mailboxes- to having lost 85 lbs and running 26.2 miles. God took me all the way and I’m so grateful. I can do all things through him- and so can you! Thank you Emily Cook and Jeff Cook for inspiring me 3 yrs ago to start running- I’m so grateful for you! ” 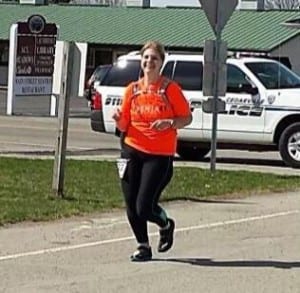 As a mother, I am not only so grateful for what our daughter accomplished with the help of the Lord, but it fills me with gratitude to see the rippling effects of her actions. Today, Sid, her autistic oldest son asked his grandfather to go running with him. They decided that they should start out with a brisk walk of 4 miles – but 4 miles they walked! And after the walk he said he wanted to keep doing that. So, tomorrow at 3 pm Grandpa and Sid will be walking again. Thank you, Kristy, for your determination, your faith, and the good example you have been to your kids.

Amazing, the rippling effects our actions have on those around us, isn’t it?